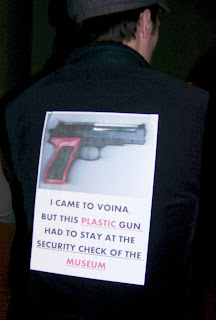 On Friday, the 16th of March 2012, the artist activist group Voina (Russian: „war”) had a public presentation at the National Museum for Contemporary Art situated in the House of People in Bucharest.

Each person attending this event had to pass through a control of his/hers belongings and a body control through a metal detector, including the Voina artists. They were even longer and more thoroughly searched. The reason for this is that the building is a military objective. A space totally dedicated to State authorities, it hosts various institutions of „national importance” like the Parliament.
We consider the event a invitation to war.
The war is against today's form of the Romanian State, a police state that has progressively straighten its repressive character in the last six months. The fundamental right to protest and contest state authority has been and still is seriously broken. Too many activists and not only have been picked up and fined abusively and even physically assaulted by the military arm of the State, the privileged Jandarmeria.
Inside the House of People, the war can only be symbolic, a representation of that real war through which the protest is, as each day passes, domesticized and annihilated. We have come to war in the only way we can: with toy guns. Just as freedom of speech is just a toy and protest just a simulacra in the eyes of the authorities. We played the role of harmless harlequins, toy-terrorists, a role that the same authorities attribute to artists. Responding to a symbolic war invitation, we try to push the limits of security and surveillance at the security check of the Museum. The toy guns are confiscated at the entrance, the art gesture is amputated in the hallway of the Great House. The reason: with toy guns one can threaten and create panic. In the space that the State dedicated to contemporary art, contemporary artists are not welcome if they undermine its authority. Two pistols out of five manage to get across the tough security check. Throughout the presentation, anyone could observe the other guns left next to the metal detector. At the first floor of the Museum, the Voina presentation is about to begin. At this moment, we place ourselves in front of the obedient audience, two of us holding our guns at sight. The others are wearing the message: „I came to Voina, but this plastic gun had to stay at the security check of the Museum”. Although we threaten the audience with our guns, nobody panics.
We are perfectly safe in the most guarded building in Romania.
The limits of security and surveillance seem unreachable.
A threatening as a simulacra and the neutralization of any conflict, this is the only Voina possible at the House of People.

An extended version of this text was presented at the Anarchist Studies Network Annual Conference, 3-5 September 2012, Loughborough University, U.K. 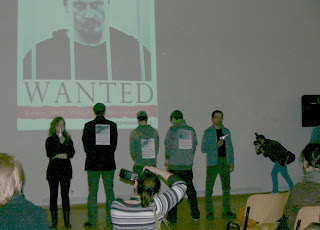