Story of the Fall #1

The Story of the Fall is a post-apocaliptic story that retells how the end came about. The Fall designates the process of the end of the world. The story is told as an event that already happened, placing the Storyteller (myself) and the audience in a near future. Performing the Story is, thus, an act of remembrance for an audience probably too young to know or remember the events.
Told in a dim, dramatic candle light, the performance incorporates two other performances: 1. illustrating the Practice of the Now-Fall (see images below with Now-Fall Training - NFT illustrations) and 2. illlustrating the practice of the ReRaProp (Retro-Radical-Prophecy).
The Practice of the Now-Fall consists of various exercises on how to fall without getting hurt (see illustrations below) while the ReRaProp practice consists in anonimously performing a text considered to be a Retro-Radical-Prophecy, meaning texts that preceed the Fall and anticipate it considerably. In this perfromance the text used is the „Introduction” by Jean-Paul Sartre to the Wretched of the Earth by Franz Fanon. The perfomance of the text is interrupted by a reading from Fanon's Black Skin, White Masks.
The Story of the Fall is primarily an exercise in political imagination. The powerfull feeling of no-way-out is an important factor in maintaing the status quo of intersectional systems of opression. Constant political imagining is crucial to destabilizing the field of representation. The idea of apocalypse is a radical esthetical vision and can be used as a tool for radical political resubjectification. The Story of the Fall is an attempt to build such a context of transformation and help pave the way for an important twist in collective representation: linking local and regional (Romanian and Eastern European) conditions with the context of the global south via postcolonial and decolonial concepts. In a way, the Story of the Fall can be viewed as a complex fiction to trigger identification (of the audience) with the ideas of Franz Fanon. It also brings into question racism and anti-racism, a very important issue in the Romanian context by questioning what could be the roles of people like myself (Eastern European „white”) in the anti-racist struggle.

>>> Excerpt from the Story.

It soon became very obvious to many that the Apocalypse culture developed by the entartainment industry was nothing more than one of capitalism's typical strategies ment to anticipate and incorporate. At first, some were still excited about it, but soon people got massively disenchanted. What were supposed to be scarry, dramatic movies – thrillers as they called them – were massively making people laugh until they cried. It just looked like a poor imitation of the real. A poor expression of a great collective fantasy. It became clear that what was happening was something far from the reach of Hollywood.
(...) It merely passed several years, when the idea of the Fall appeared. Sprung from the people concentrated on developing a praxis, the Fall strategically contained all of the great components of the Slogan. The Fall is neither an ideology, nor a belief. It is merely a vision. It was this indefinite character of the Fall that made it able to resist cooptation. Of course, it took a lot of time and a lot of blows that had to be diverted but in the end, it worked. Even in its most difficult moments there where at least a hundred thousand people practicing it on a daily basis.
The idea was that for the Apocalypse as an-end-to-the-world-as-we-know-it to happen, all of the great man-made systems had to fall. To Fail – Brake – Collapse – Bankrupt – Crash – Ruin. All of these processes were contained in the idea of the Full-Fall. (...) Taken these into account, the idea of the Now-Fall prepared people for the loss of everything as they knew it. Fear had to become a familiar feeling, however still negative. Fear was supossed not to be enjoyed but rather become a necessary tool in the Great Process of the Full-Fall. Once the Full-Fall is achieved, the Fear had to continue to be a tool for keeping tranformation in a flow. (...)
The fear of losing the world as you know it is very similar with the fear felt when the body is in danger of injuries. This simple observation led to the creation of the Now-Fall Training system. Referred to as NFT, this system enabled people that practiced it, to prepare for the Full-Fall. The NFT consisted of multiple types of fall exercises adapted for a variety of people. According to age, health state, habitual gear etc., one could practice the fall of one's own body regularly. In the process of training, one would achieve several abilities necessary for the Full-Fall process: stop avoiding fear of losing everything, enact one or several action(s) that risk who you are in the world, survive losing everything, change one's own subjectivity after the Fall. (...)” 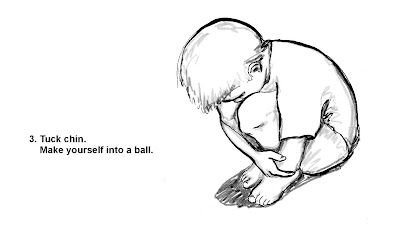