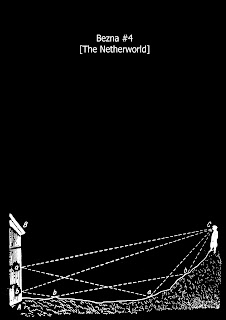 
The Second Body and The Multiple Outside - Alina Popa As long as we are caught in the present available body, there is indeed no outside. The problem is not that there is no outside, but it lies precisely in the fact that we are caught in the same outside without working with it. There are multiple outsides to be produced. Even an outside devoid of human and without thought.

The Story of the Fall - Veda Popovici "Generally a relaxed body results in fewer injuries in falls." excerpt from the FFI (Full Fall Instructions). We welcome all to the lecture of the Story of the Fall. This story, told today, after it happened, counts as an act of remembrance and re-learning the New Fear. Springing out of the hybridization of banal darkness with exceptional darkness, it is this New Fear the emotion to trigger the Full Fall.

The pleasure of nibbling in case of afterlife emergency - Mihai Lukacs + Arnold Șlahter "At this point, there's no really authentic way for us to say who or what to look for and guard yourself against. Reaction of law enforcement officials is one of complete bewilderment at this hour. Do not venture outside for any reason until the nature of this crisis has been determined, and until we can advise what course of action to take. The safest course of action at this time is simply to stay where you are. So far, the best advice they are able to give the public is this: "Tell the people for God's sake to get off the streets! Tell them to go home and lock their windows and doors up tight!" (George A. Romero)

Black Lol - Iuliana Stoianescu A blonde was sitting on a couch in front of the TV, when suddenly she hears knocking at the door. She goes to the door and askes: “Who is it?” “Me!” “Me?!?” :))))

The Outernational Condition - Ion Dumitrescu For someone in front of the Iron Curtain (looking over the fresh ruins of the wall) the east seemed an unmolded territory with resilient subjects living in geo-political dim light, humanoid silhouettes agitating in obscurity, apparently not fully developed, too weird to live too rare to die, craving to break in the international habitus. They appeared incomprehensible and unevolved on too many levels. It was only later that these outer-subjects were tamed and transformed in voracious consumers.

Microbification and the Politics of Noise - Irina Gheorghe In the utopian construction of a new world, the borders with the already existing one is clearly marked and fortified. Under the terror of invasions, infiltrations, infections, autonomy and immunity seem to be the only alternative promises. But when interior and exterior are already contaminated by one another separation becomes impossible and resistance annihilates itself.

Centrul de Calcul Bucuresti - Ștefan Tiron + Claudiu Cobilanschi (side event, Wednesday, 26 Jun, 11h00, guided tour in the Museum of Politehnica University, Bucharest). Centrul de Calcul is interested in obsolete forms of knowledge, in retro-futurisms, in the bulky, outrageous and unwarranted nationalistic craze about inventors but also the accidental rediscovery of naive savoire faire that, to us at least, is in need of radical reappraisal.