Migrant's Monument - to be erected 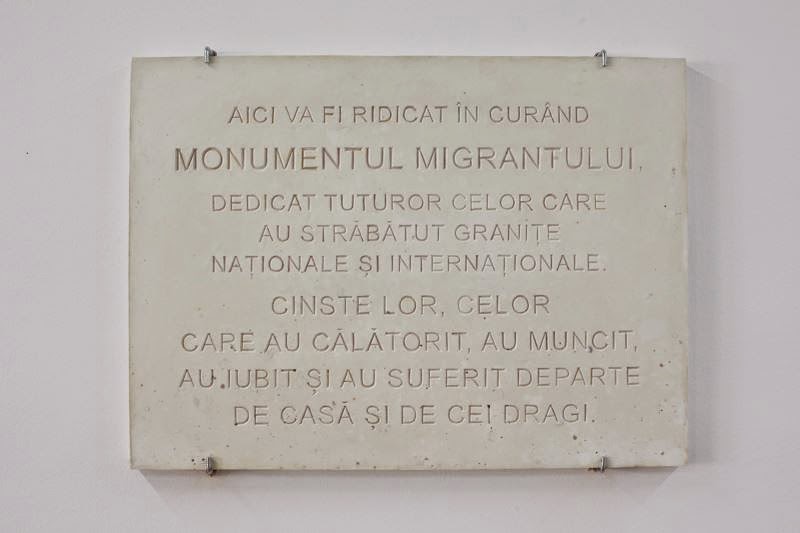 English translation of text on the plaque:

HERE SHALL BE ERECTED SOON
THE MIGRANT'S MONUMENT
DEDICATED TO ALL THOSE
WHO HAVE CROSSED BORDERS
NATIONAL AND INTERNATIONAL.
IN THEIR HONOR, TO THOSE
WHO HAVE TRAVELLED, WORKED,
LOVED AND SUFFERED FAR
FROM HOME AND THEIR LOVED ONES.

Are there any more difficult to cross borders for Romanian citizens? The distant West seems to say that no, not now when the privilege to be part of the exclusive club of Europe has been de jure given to this population. Granting a considerable transborder mobility comes though with a price: the duty to contribute at the consolidation of the fortress Europe. The borders that shelter the so-called values of civilization stretch today to Romania and must be defended in the face of the eternal barbarian hordes.

Europe's imposed request by is not just a condition or a paternalist remark. It is an attempt to erase the recent memory of the suffering endured by those here, of all the humiliations of Romanian citizens of not being Christian, white or civilized enough. And to negate the continuation of these injustices today. The Migrant's Monument is the never realized promise of the celebration of this memory. Because the suffering, the humiliation but also the resistance and solidarity continue in the migrant context, as long as there will be national and international borders.

People of various ethnic backgrounds who circulate Europe and the world more easily than others because they posses Romanian citizenship, part of the EU, could have more in common with those coming from Cameroon, Vietnam, Syria or Peru. Difference and similarity do not reside in ethnic origin but in the role prescribed by the labor apparatus of the construction of the "European civilization". For all of the populations of these countries these are especially those of the caretaker, maid, the cook, builder and driver, waiter and babysitter. And, like these, Eastern Europe has not disappeared after 1989 but simply put in a place of invisibility.

The Migrant's Monument is an intervention in the field of the representation of national identities situated in the transformative context of migration. Seen as a solidarity message, the plaque carries both the impossibility of remembrance and honor by local authorities and the hope for collective dignity.

The figure of the foreigner (stranger) is central both to European identity and to national identities within the EU. Romanian citizens constitute for years a special category of foreigners for Western eyes: never sufficiently European, civilized or white. This representation is applied, although in a different measure to persons outside of European space that manage to arrive in Western Europe. Romania public space has taken up this representation, putting an apparent distance between the foreigner from Romania in the West and the non-European foreigner in Romania. But the two conditions are much more alike than apart.

This project seeks to explore such representations and the possibilities of transforming them with the aim of transborder solidarities.

In support of the Freedom March 2014!

1. The plaque, exhibited initially in the exhibition space and then installed at the Rahova International Bus Station on 11.06 (see below);

3. A public debate: "Strangers across the borders and strangers within the borders", with Bashar Al-Kishawi, Simina Guga, Veda Popovici, David Schwartz on 22.06, Salonul de Proiecte. 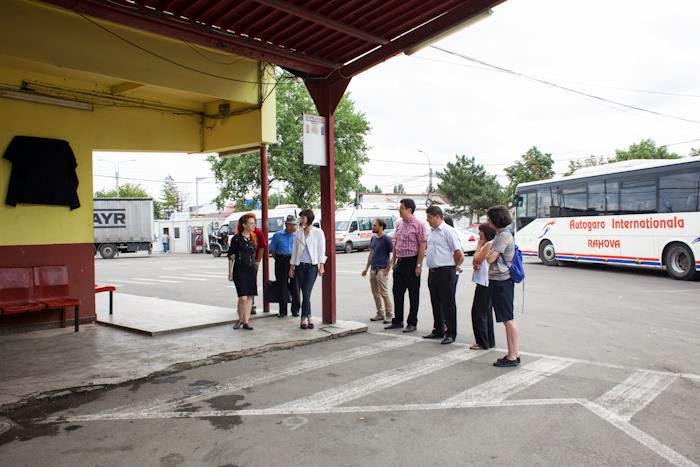 View of the installation in the bus station.